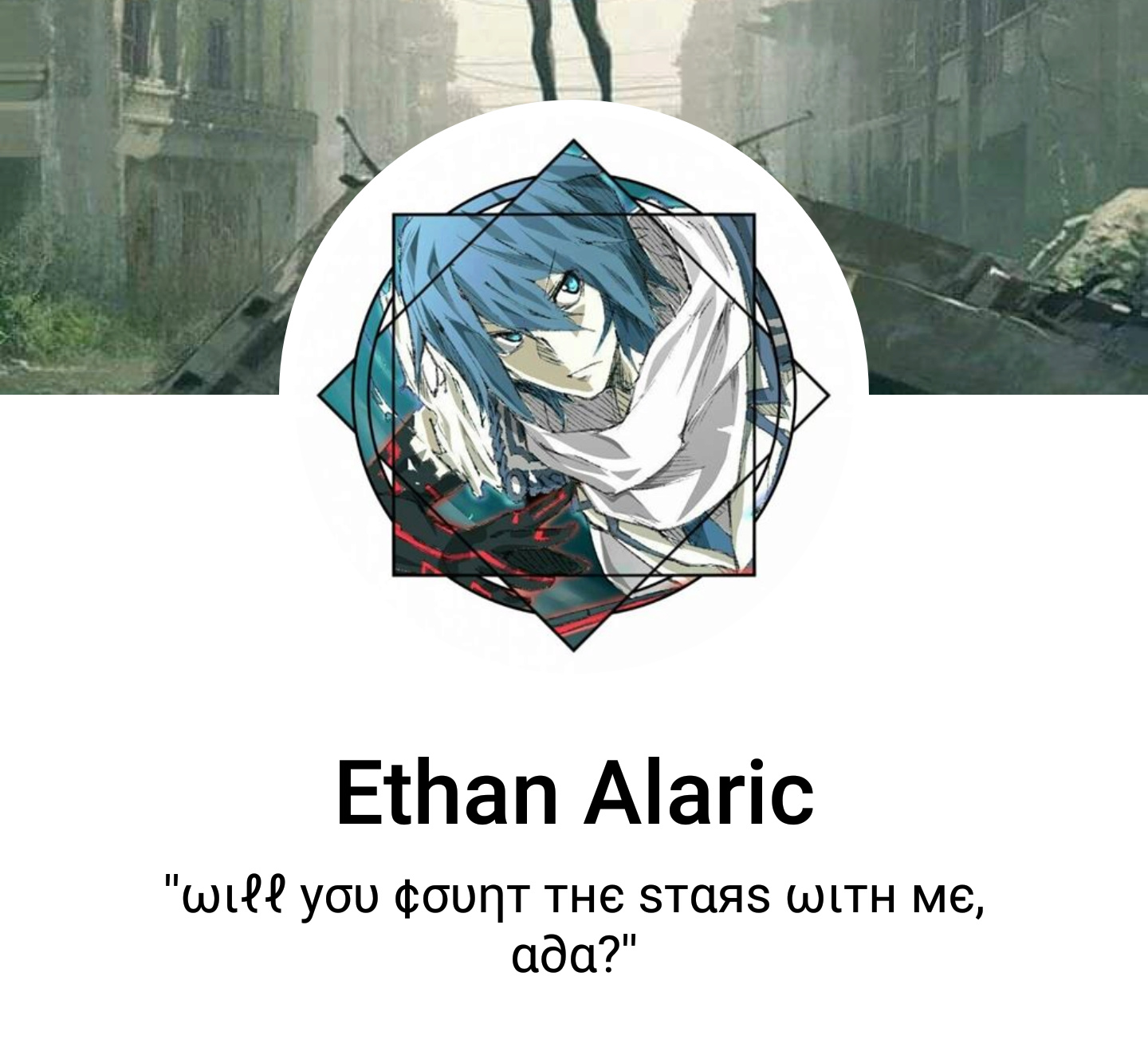 Everything here is not made up nor is it slander! All screenshots are to help indicate the evidence of what is being stated here! All accusations made by Ethan isn't just made up but a tactic to avoid his own personal demons! Since ethan loved to stalk posts from forums I was on when i was about 16 yrs old he shouldn't cry, whine, and or complain about his privacy when he and his friends don't respect mine or my family!

And to be clear!! I gave him and his friends warnings on leaving my FAMILY out of this internet beef drama they started and they didn't listen! KARMA IS A MOTHERFUCKING BITCH!!

VIEWERS UNDER 18+ PARENTAL SUPERVISION IS NEEDED!

Oh boy, here we go again, everyone! Ethan Alaric is back at talking shit and making lies up because he is insecure!

He now claims the following....
1. Ethan Alaric is now claiming that Im a pedophile. (0 evidence.)

2. Ethan Alaric is claiming that Im a stalker? Homophobe?

3. Ethan Alaric is telling people that I lived in a basement for 6 years?....

4. That he has "legal" documents about me stealing property?....you can't steal something that has no COPYRIGHT.  Now you are reading this and wondering where is the context?.....and I'll give you the background of it.

You see.....Ethan Alaric for a year has stated and claimed himself to have known me for "6 years" now....that's not just the creepy part....he has a roleplay account and oh yeah not shocking that some online loser who promote harassment and stalking of other people and their families would be behind such a thing......now I will state Ethan hasn't shown any proof WHATSOEVER that we ever had any contact outside of facebook.

. ....so yeah he posted things told by Antvasima (Who I discussed about before for also being a liar and a problem  in my online history) now you just read that correctly....H le posted someone else's "delusional" opinions and experiences...and told people I been banned for false things like threats and homophobic slurs....Which again I explained none of that even existed, to begin with....

Now its been nearly or is a year since I ever even talked to this creep.....and here he is telling a manchild named Dan lies about me from "Oh he lived in the basement for 6 years." And some other lies......  I even admitted to him and others I had some sexual experiences in school and outside of school but to ethan delusional world "it's not real."....yeah this guy is telling me what I did in my own life?....like seriously? How old are you to even claim you know someone when you don't know them personally?....he kept raging about Virgin this and that....dude doesn't even know the sexual term of a Boob job...he used webster dictionary to prove a nonexisting argument....Evidence? 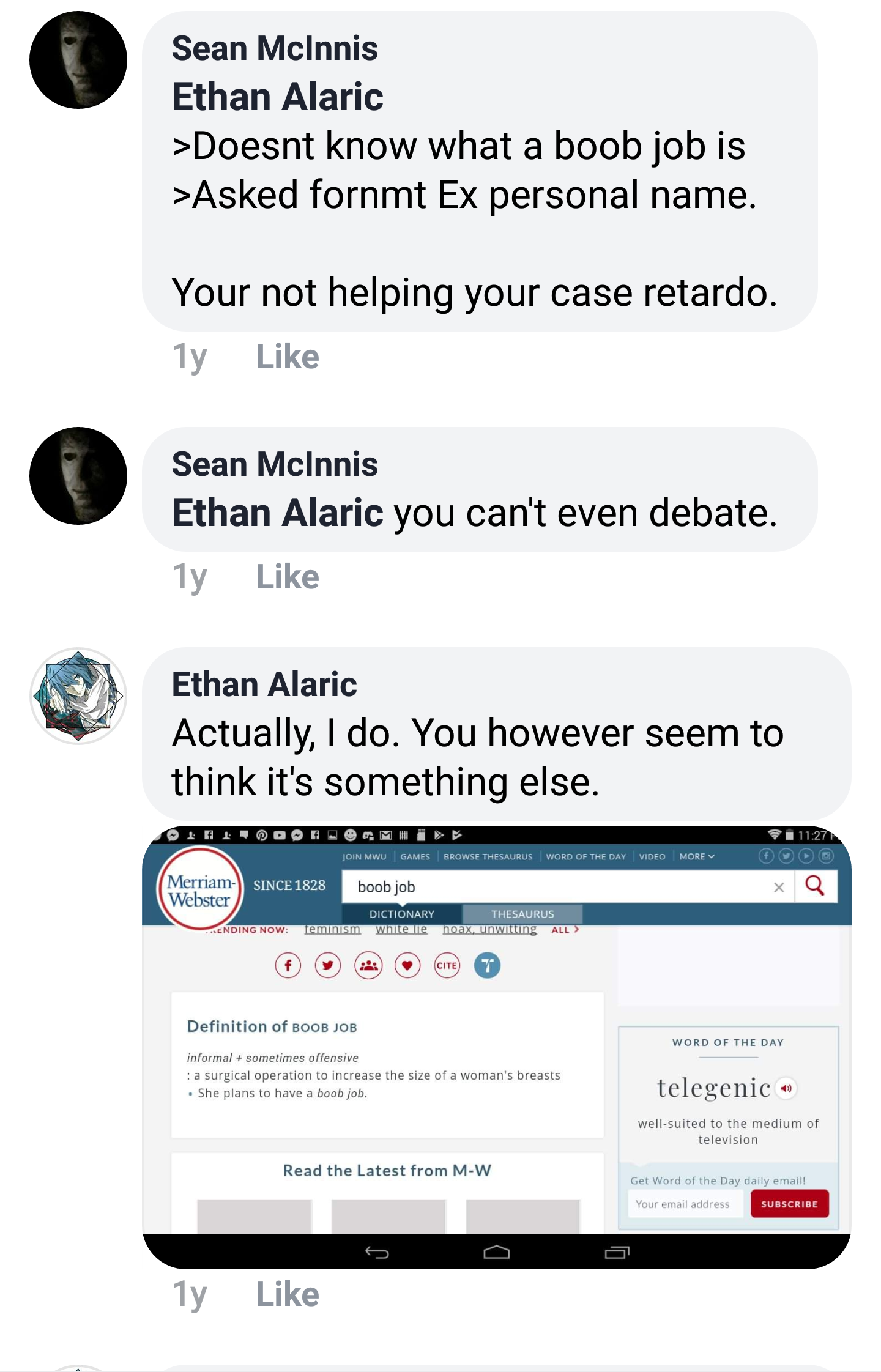 Yes....that's right the guy calling me a virgin....(who really cares if someone is or isn't?....) doesn't know what a Boob Job is.....what's worse is this liar claimed to people I begged and asked for nudes of his fiance?.....Oh, look at this screenshot!

talk about exposing when you OFFER TO SEND YOUR (FAKE) FIANCES NUDES! and yes ETHAN himself CHALLENGED such a request and I called him out for it...firstly what dude would willingly (try) to expose his fuckin lover in the first place?...... 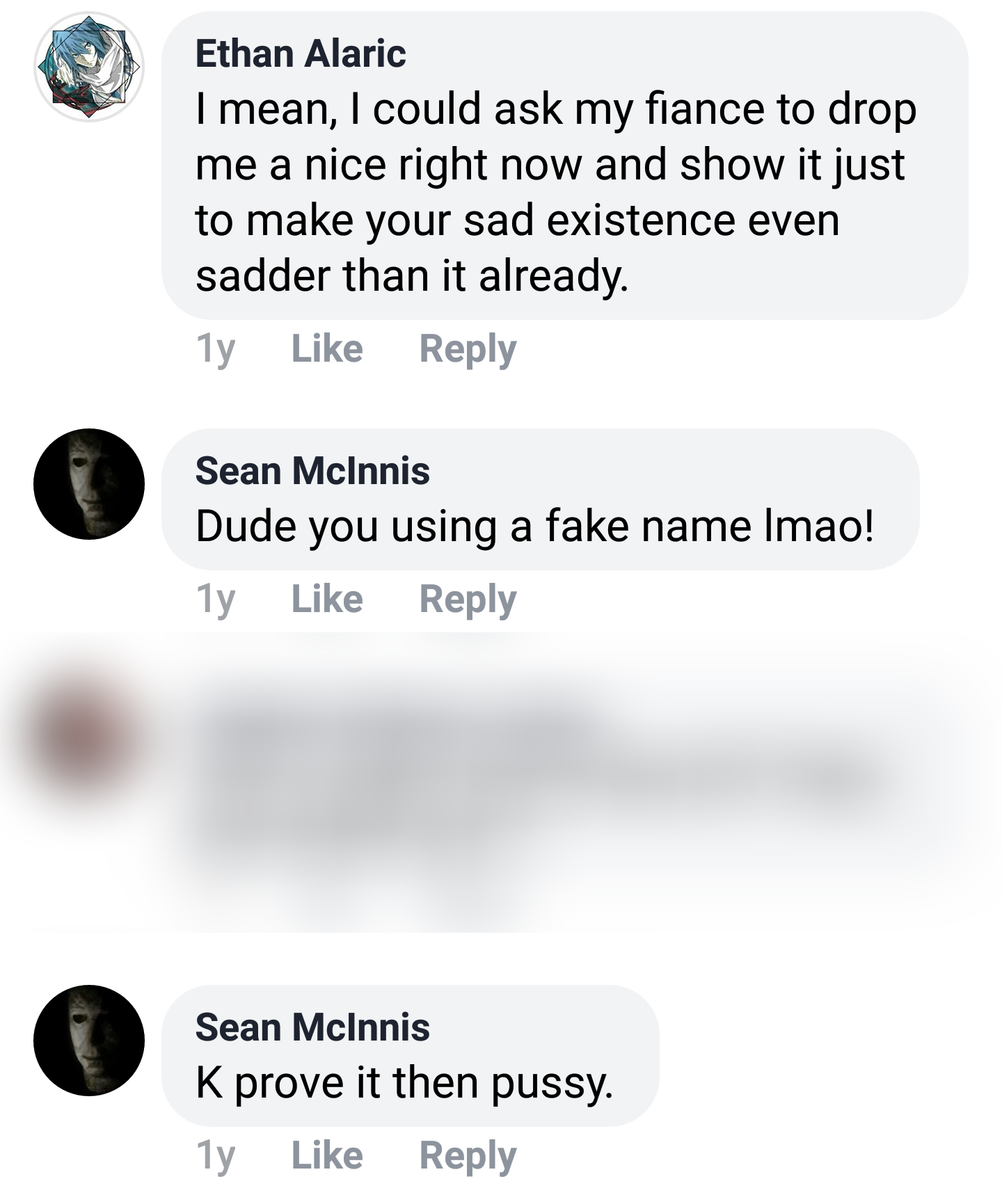 Ooooh geez there Ethan! You getting exposed for lying to your group of stalking harassing pedo friends!   And here ethan claims he touched a woman...and etc with the "I can just ask her right now hurdur." But you had to blur something out which can be easily fake?....he showed a cropped chat.....yup a cropped messenger chat between him and an unknown person....you gonna see what I mean but here....look at this.... 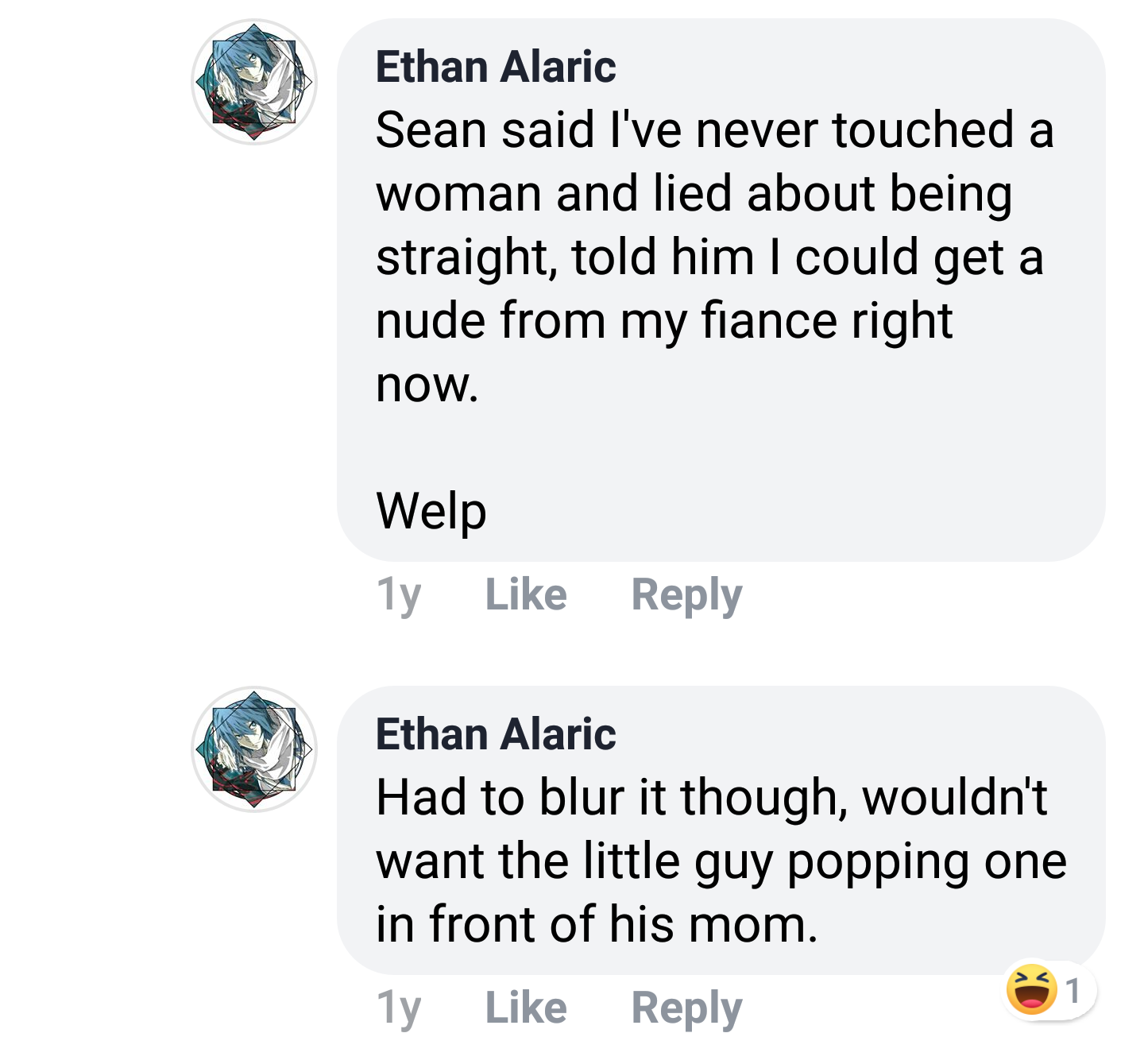 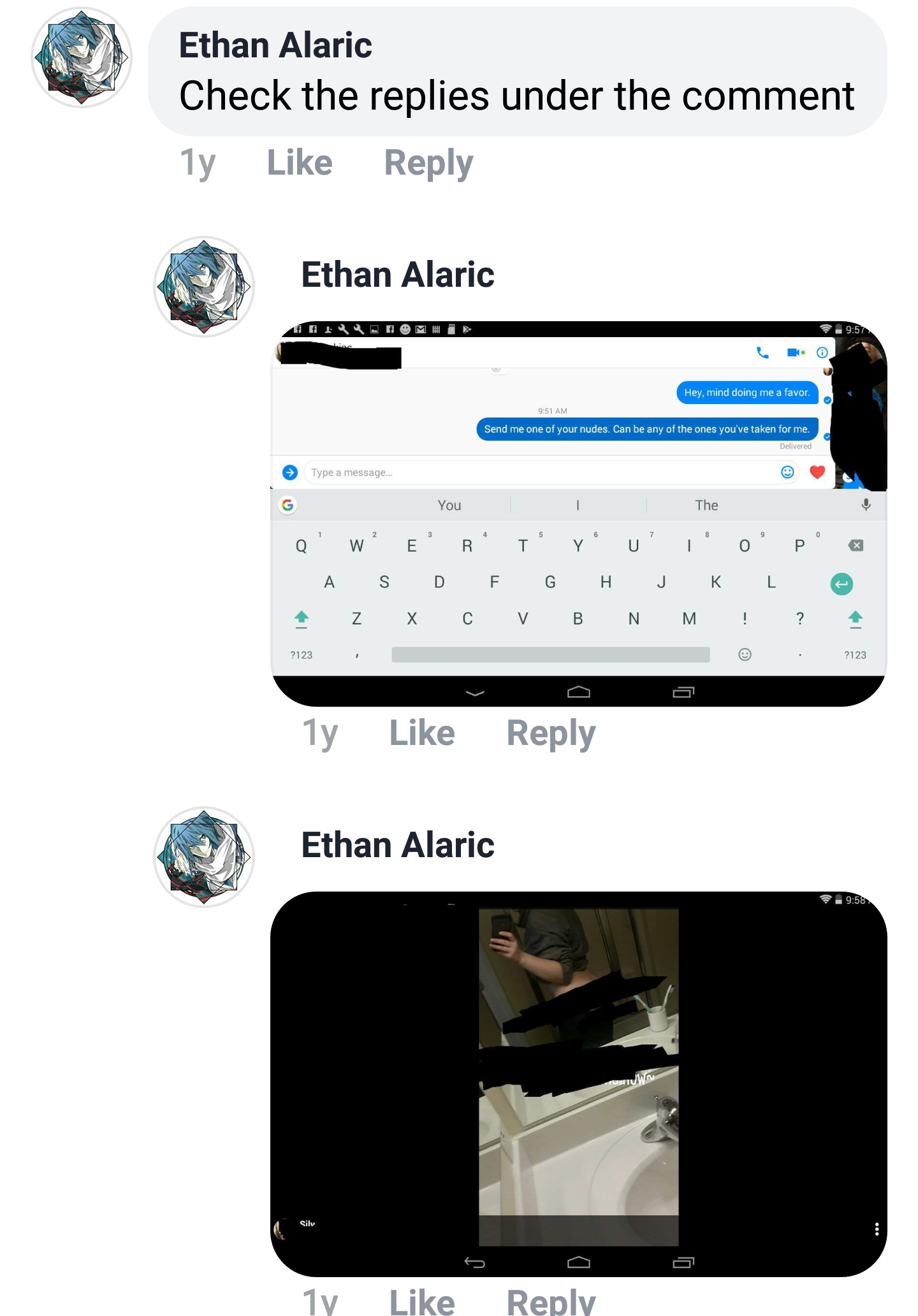 2. It has a signature blurred out. (What fiance sends a signature with a nude? Oh right....a cam girl I guess we know who the real incel is huh ethan?)

3. His posts don't even prove he touches women and let alone proves it's his fiance whatsoever so good job at holding the L there little buddy!  As you can tell here...ethan is a sad sad sad human being who roleplays on facebook and hides behind a fake account to hide his insecurities of being some online harassing stalker who makes shit up for attention and to be irrelevant.  I could go on how much of a hypocrite he is but that will wait for later for a part 2 that is if he ever wanna keep going! And for everyone reading...this man left the argument knowing damn well he lost...he claims I have no life and etc but yet I literally showed proof I have a job vs anyone else like him and dan who sits on the computer or phone all day typing some bullshit for attention.  P.S this creep before the group went all secret out of fear had this guy talking about having sex with loli robots.
Updates!
July 3rd 2019 Ethan Alaric claims this without proof....

So this man just making up false accusations because I exposed him on his profile how much of a coward are you ethan?? Here is a link to the post! Ethan Alaric Post (and oh since Ethan and his group of creeps don't care for my privacy I don't care for theirs.

Oh yeah, his profile so you don't think its an alt or a fake even tho Ethan has openly admitted HE IS A FACEBOOK ROLEPLAYER.

Ethan deleted the post I linked about the fake allegations he never shown proof for LMFAO! he then tries to claim I got it deleted without showing us a single report screen!