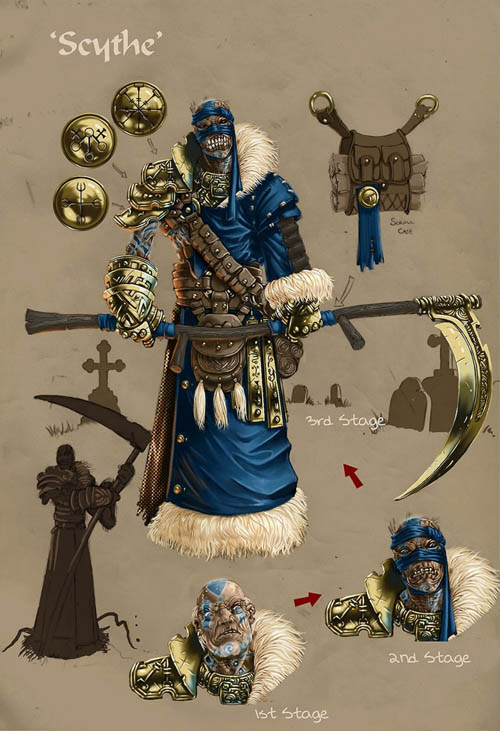 Hello everyone reading! I will like to set a few things down for all the readers! This was pretty rushed for me to summarize everything I had to think about for the series, I have played all the games, and I even used the Fable Wiki so I won't inaccurately get my memory all over the place and so this theory isn't based on pure fan speculation but is greatly speculated from and by the game itself!

They both disappeared from Albion at one point in time of the first game and this is for a very long time and both are implied to make a "reappearance" in the future as of Fable 3 which is the last mention that he will be returning for one of his weapons the Scythe Hammer.


It goes to state:

I woke up today in such a peculiar place. It's like a great big forest, with lots and lots of trees that go on forever. I was scared at first because I couldn't find you, but there's someone here who says he knows us, says he knows our family. He told me his name, but I keep forgetting it. Weird. I think he's a king or something. He's very thin and wears a hood and looks scary, but he's nice and I feel safe with him here. I hope you're okay Little Sparrow. Somehow I know that it's all going to be alright, and we'll be together again one day. He promised me.

Now you are wondering......it sounds like the return of "Jack of Blades" but it isn't! it was Scythe which I have confirmation from the Devs that it was Scythe!

noticed how she specifically mentions the history of their family and that he looked like a king? all heroes from the first to the third game are all direct descendants of William Black himself!

Evidence 4: William and his disappearance led him to seek immortality:

Fable Wiki wrote: "Under William's reign, Albion entered a golden age of peace and prosperity, but his fight with The Court and his time in The Void had weakened his body and infected him with a wasting illness. Faced with this decay, he vanished from the world, leaving his children, who without an enemy to vanquish, had grown petty, selfish and cruel -- which began the corruption of the Old Kingdom."

Now "vanished" doesn't once imply Deceased!  this would follow the in-game implications that one day William Black will return to Albion and plus from the main website history for the characters William had an unhealthy hatred for the Court and he knew jack of blades was still alive and so to avoid an untimely death he sought more demonic means as Scythe is mentioned to be a Necromancer which makes sense due to the scythe/name given to him.

and then there was his obsession with keeping Albion save and unified and only my theory suggests he left to see how things will turn out and that if he did come back claiming to be William black without any evidence/credibility since the character would be thousands of years old.


Out of all the in-game content DLC or main game, it would be Scythe's gear description which states he was an Archon.....from me playing the fable anniversary which includes The Lost Chapter DLC it states this: "How many pairs of shoes can an Archon go through in their lifetime?" And then states: "These gauntlets are proven to last many centuries"

In Greek/Fableverse an Archon is a ruler and we know from the in-game lore/the website that William Black was the 1st in Albion itself and then only his children were titled "Archon" and then they faded into history until there were no longer Archons existing in the current timeline for Fable 1-3.


The in-game dialogue which is stated by the Oracle themselves when recounting the story of the Archon is this!

Oracle wrote:But the first Archon still casts his shadow in this world.

Now if William black was deceased Wouldnt the all fate seeing oracle state his shadow now longer is cast on the world?

This evidence is in regard to the in-game descriptions of the 1st Archon William Black vanishing out of nowhere which it's stated he last wore a golden mail and a blue robe, the exact description of the clothing that Scythe is dressed in at the time of Fable: The Lost Chapters/Fable Anniversary.

This theory is heavily supported in the Fable: The Journey game, in which the heroine Theresa went into detail of the story behind William Black to the new "Hero" Gabriel while traveling in the city of Miremoor which if people were listening to the details after William Black's journey into The Void to cast off the Corruption that afflicted him during his first voyage into the Void, she goes on to state that William Black disappeared, never seen again in a form that would be recognizable to the denizens of the Old Kingdom.

like I said earlier in this article that him returning would be a huge trial and error for him because proving his name in a new time era where many people from the old kingdom no longer live.

In 2019 on twitter Dene Carter had answered some questions about the Court which he answers:

Dene Carter wrote:"Knight and Queen are 'gone'. Forever? Maybe not." "As for Jack being 'killed'... he's a multidimensional god. I think you overestimate the power of Heroes. Banishment from this realm? Sure. *Nobody* has seen Jack's true form, apart from maybe William Black, and he's not talking about it. Ever."

Dene Carter wrote:Banishment from this realm? Sure. *Nobody* has seen Jack's true form, apart from maybe William Black, and he's not talking about it. Ever."

Further confirmation that
1. The Court isn't truly dead at all in the fableverse!
2. Dene Carter makes it seem that Willaim Black is still a living character in the game!

A Russian Fable Fan community had asked this to Dene Carter (Aka the Co-Creator) of the Fableverse this question..... 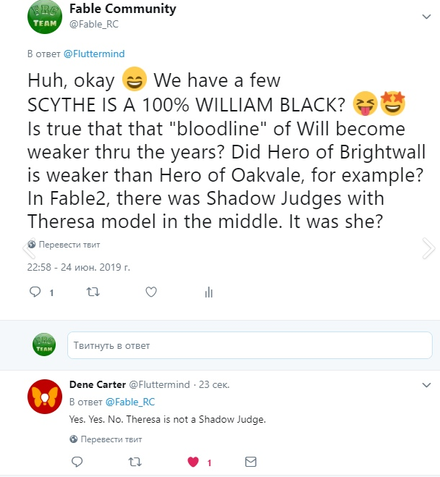 Note: They did state their English wasn't so good and that it was rushed!

I ask Dene Carter himself! 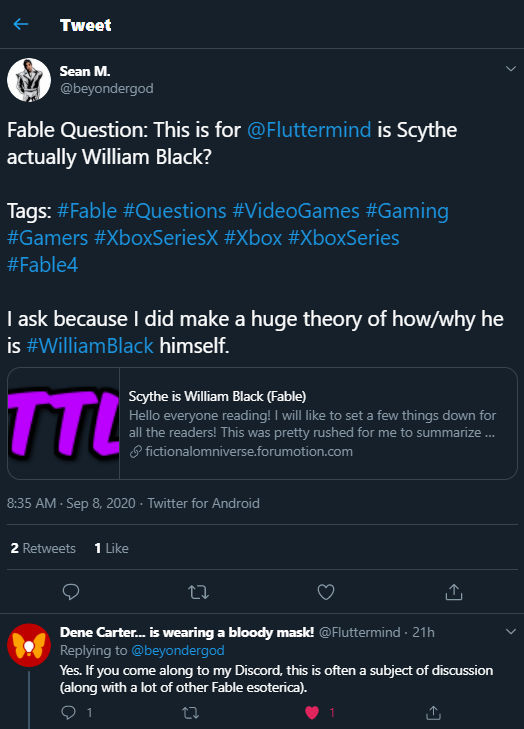 This is now Official and Official Canon that Scythe is William Black! and that all the headcanon/fan theories is and was correct!